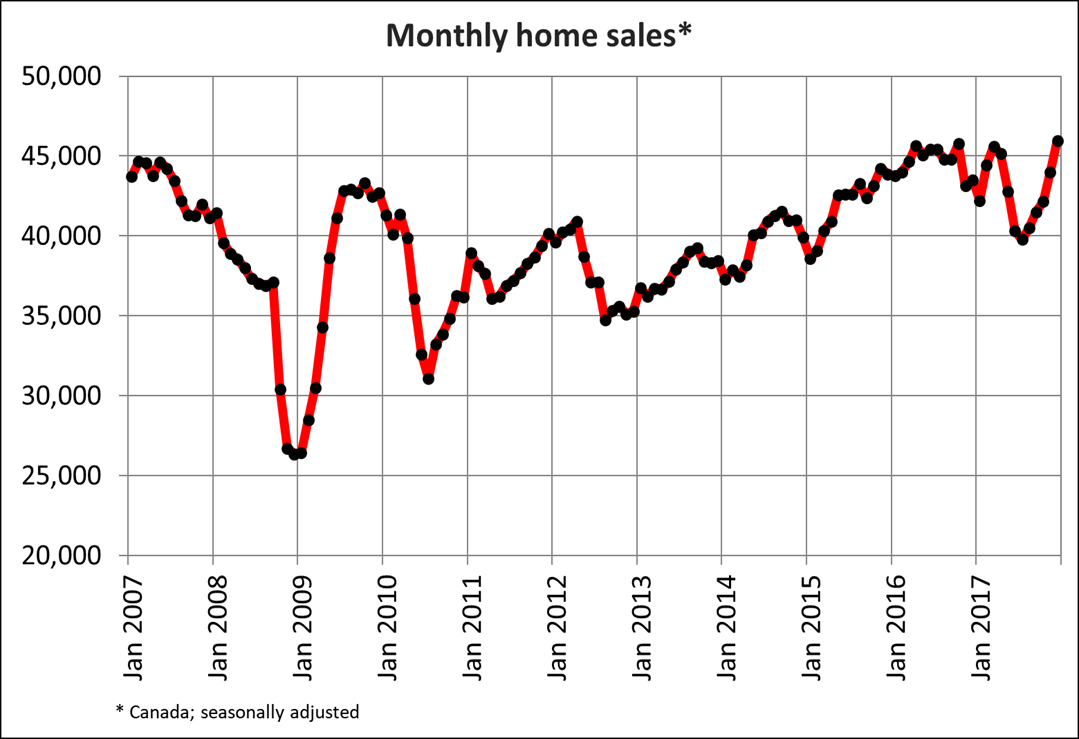 Activity in December was up in close to 60% of all local markets, led by the Greater Toronto Area (GTA), Edmonton, Calgary, the Fraser Valley, Vancouver Island, Hamilton-Burlington and Winnipeg.

Actual (not seasonally adjusted) activity was up 4.1% from December 2016. While activity remained below year-ago levels in the GTA, the decline there was more than offset by some sizeable y-o-y gains in the Lower Mainland of British Columbia, Vancouver Island, Calgary, Edmonton, Ottawa and Montreal.

“Monthly momentum for national home sales activity gained strength late last year and further expected economic and job growth will buoy sales activity this year despite slightly higher expected interest rates,” said CREA President Andrew Peck. “Even so, momentum for home sales differs depending on location and type,” he added. “A professional REALTOR® is your best source for information and guidance in negotiations to purchase or sell a home during these changing times,” said Peck.

“National home sales in December were likely boosted by seasonal adjustment factors and a potential pull-forward of demand before new mortgage regulations came into effect this year,” said Gregory Klump, CREA’s Chief Economist. “It will be interesting to see if monthly sales activity continues to rise despite tighter mortgage regulations that took effect on January 1st.”

The number of newly listed homes rose 3.3% in December. As in November, the national increase was overwhelmingly due to rising new supply in the GTA.

New listings and sales have both trended higher since August. As a result, the sales-to-new listings ratio has remained in the mid-to-high 50% range since then.

Considering the degree and duration that the current market balance is above or below its long-term average is a more sophisticated way of gauging whether local housing market conditions favour buyers or sellers.

Market balance measures that are within one standard deviation of the long-term average are generally consistent with balanced market conditions.

Based on a comparison of the sales-to-new listings ratio with its long-term average, more than two-thirds of all local markets were in balanced market territory in December 2017.

There were 4.5 months of inventory on a national basis at the end of December 2017. The measure has been moving steadily lower in tandem with the monthly rise in sales that began last summer.

The number of months of inventory in the Greater Golden Horseshoe region (2.1 months) was up sharply from the all-time low reached in March 2017 (0.9 months). Even so, the December reading stood a full month below the region’s long-term average (3.1 months) and reached a seven-month low. 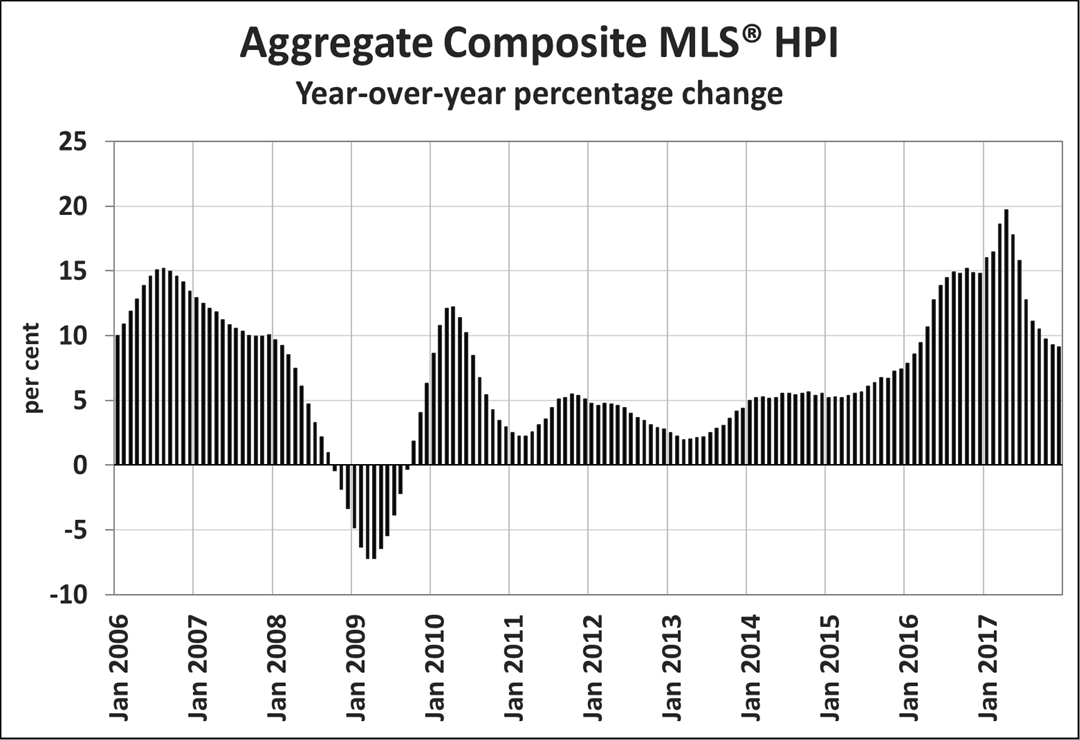 The Aggregate Composite MLS® HPI rose by 9.1% y-o-y in December 2017. This was the 8th consecutive deceleration in y-o-y gains, continuing a trend that began in the spring. It was also the smallest y-o-y increase since February 2016.

The deceleration in y-o-y price gains largely reflects trends among Greater Golden Horseshoe housing markets tracked by the index, particularly for single-family homes. On an aggregate

basis, only single-family price increases slowed on a y-o-y basis. By comparison, y-o-y price gains picked up for townhouse/row and apartment units.

Benchmark home prices were up from year-ago levels in 9 of the 13 markets tracked by the MLS® HPI, with Calgary and Oakville-Milton price comparisons tipping slightly into negative territory on a y-o-y basis.

After having dipped in the second half of last year, composite benchmark home prices in the Lower Mainland of British Columbia have recovered and now stand at new highs (Greater Vancouver: +15.9% y-o-y; Fraser Valley: +20.9% y-o-y).

Benchmark home prices rose by about 14% on a y-o-y basis in Victoria and by about 19% elsewhere on Vancouver Island in December. These y-o-y gains were similar to those recorded in October and November.