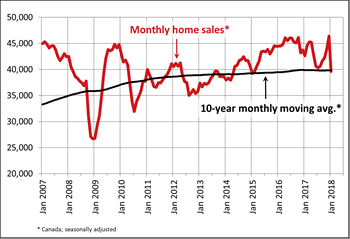 Home sales via Canadian MLS® Systems dropped sharply in January after having climbed to the highest monthly level on record in December. Although activity retreated to the lowest monthly level in three years, January sales were on par with the 10-year monthly average.

Activity in January was down in three-quarters of all local markets in Canada, including virtually all major urban centres. Many of the larger declines in percentage terms were posted in Greater Golden Horseshoe (GGH) markets, where sales had picked up late last year following the announcement of tighter mortgage rules coming into effect in January.

Actual (not seasonally adjusted) activity was down 2.4% from January 2017 and stood close the 10-year average for the month of January. Sales came in below year-ago levels in about half of all local markets, led by those in the GGH region. By contrast, sales were up on a y-o-y basis in the Lower Mainland of British Columbia and Vancouver Island, the Okanagan Region, Edmonton, Montreal, Greater Moncton and Halifax-Dartmouth.

“The piling on of yet more mortgage rule changes that took effect starting New Year’s Day has created homebuyer uncertainty and confusion,” said CREA President Andrew Peck. “At the same time, the changes do nothing to address government concerns about home prices that stem from an ongoing supply shortage in major markets like Vancouver and Toronto. Unless these supply shortages are addressed, concerns will persist,” he added. “A professional REALTOR® is your best source for information and guidance in negotiations to purchase or sell a home during these changing times,” said Peck.

“The decline in January sales provides clear evidence that the strength in activity late last year reflected a pull-forward of transactions, as rational homebuyers hurried to purchase before mortgage rules changed in 2018,” said Gregory Klump, CREA’s Chief Economist. “At the same time, a large decline in new listings prevented market balance from shifting in favour of homebuyers.”

The number of newly listed homes plunged 21.6% in January to reach the lowest level since the spring of 2009. New supply was down in about 85% of all local markets, led by a sizeable decline in the GTA. Large percentage declines were also recorded in the Lower Mainland of British Columbia and Vancouver Island, the Okanagan Region, Hamilton-Burlington, Oakville-Milton, Kitchener-Waterloo, London and St. Thomas, Kingston and Ottawa, closely mirroring the list of markets that saw the largest sales declines in January.

With new listings having fallen by more than sales, the national sales-to-new listings ratio tightened to 63.6% in January compared to the mid-to-high 50% range to which it held since last May.

For that reason, considering the degree and duration that market balance is above or below its long-term average is a better way of gauging whether local housing market conditions favour buyers or sellers. Market balance measures that are within one standard deviation of the long-term average are generally consistent with balanced market conditions.

There were 5 months of inventory on a national basis at the end of January 2018, which is close to the long-term average of 5.2 months. 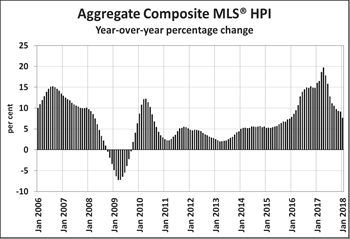 The Aggregate Composite MLS® HPI rose by 7.7% y-o-y in January 2018. This was the 9th consecutive deceleration in y-o-y gains, continuing a trend that began last spring. It was also the smallest y-o-y increase since December 2015.

As was the case in December, Benchmark home prices in January were up from year-ago levels in 9 of the 13 markets tracked by the MLS® HPI.

Composite benchmark home prices in the Lower Mainland of British Columbia continue to trend higher after having dipped briefly during the second half of 2016 (Greater Vancouver: +16.6% y-o-y; Fraser Valley: +22.4% y-o-y). Apartment units have been driving this regional trend in recent months, with single family home prices having stabilized.

Benchmark home prices rose by about 14% on a y-o-y basis in Victoria and by about 20% elsewhere on Vancouver Island. These gains are similar to those recorded during the fourth quarter of last year.

Price gains have slowed considerably on a y-o-y basis in the GTA, Guelph and Oakville-Milton; however, home prices in the former two markets remain above year-ago levels (GTA: +5.2% y o-y; Guelph: +10.9% y-o-y; Oakville-Milton: -1.2% y-o-y). Monthly prices in these markets have shown signs of stabilizing in recent months after having climbed rapidly in early 2017 and subsequently retreated.