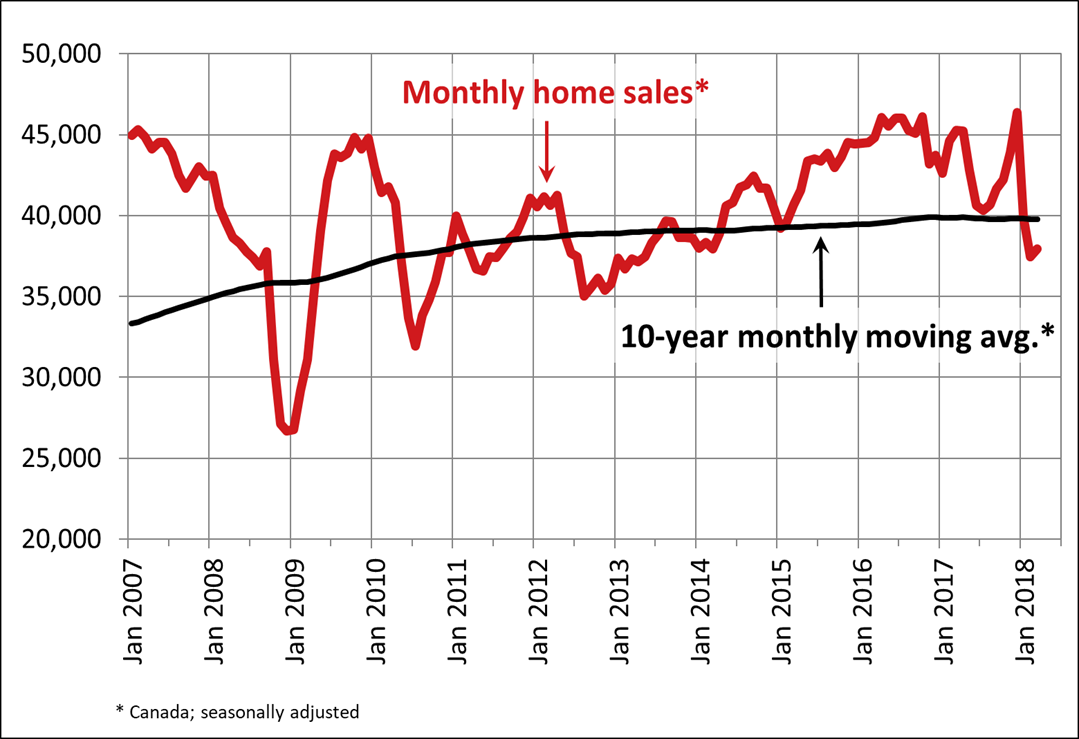 Home sales via Canadian MLS® Systems edged up 1.3 % from February to March 2018. Despite having improved marginally in March, national sales activity in the first quarter slid to the lowest quarterly level since the first quarter of 2014.

March sales were up from the previous month in over half of all local housing markets, led by Ottawa and Montreal. Monthly sales gains were offset by declines in B.C.’s Lower Mainland, the Okanagan Region, Chilliwack, Calgary and Edmonton.

Actual (not seasonally adjusted) activity was down 22.7% from record activity logged for March last year and marked a four-year low for the month. It also stood 7% below the 10-year average for the month. Activity came in below year-ago levels in more than 80% of all local markets, including every major urban centre except Montreal and Ottawa. The vast majority of year-over-year declines were well into double digits.

“Government policy changes have made home buyers and sellers increasingly uncertain about the outlook for home prices,” said CREA President Andrew Peck. “The extent to which these changes have impacted housing market sentiment varies by region,” he added. “A professional REALTOR® is your best source for information and guidance in negotiations to purchase or sell a home during these changing times,” said Peck.

“Recent changes to mortgage regulations are fueling demand for lower priced homes while shrinking the pool of qualified buyers for higher-priced homes,” said Gregory Klump, CREA’s Chief Economist. “Given their limited supply, the shift of demand into lower price segments is causing those sale prices to climb. As a result, ‘affordably priced’ homes are becoming less affordable while mortgage financing for higher priced homes remains out of reach of many aspiring move-up homebuyers.”

The number of newly listed homes rose 3.3% in March. However, new listings have still not recovered from the 21.1% plunge recorded between December 2017 and January 2018 – the largest month-over-month decline on record by a large margin. With sales up by less than new listings in March, the national sales-to-new listings ratio eased to 53% in March. The long-term average for the measure is 53.4%.

A national sales-to-new listings ratio of between 40% and 60% is generally consistent with a balanced national housing market, with readings below and above this range indicating buyers’ and sellers’ markets respectively. That said, the range consistent with balanced market conditions varies among local markets.

For that reason, considering the degree and duration that market balance is above or below its long-term average is a better way of gauging whether local housing market conditions favour buyers or sellers. Market balance measures that are within one standard deviation of the long-term average are generally consistent with balanced market conditions.

Based on a comparison of the sales-to-new listings ratio with its long-term average, more than 60% of all local markets were in balanced market territory in March 2018. 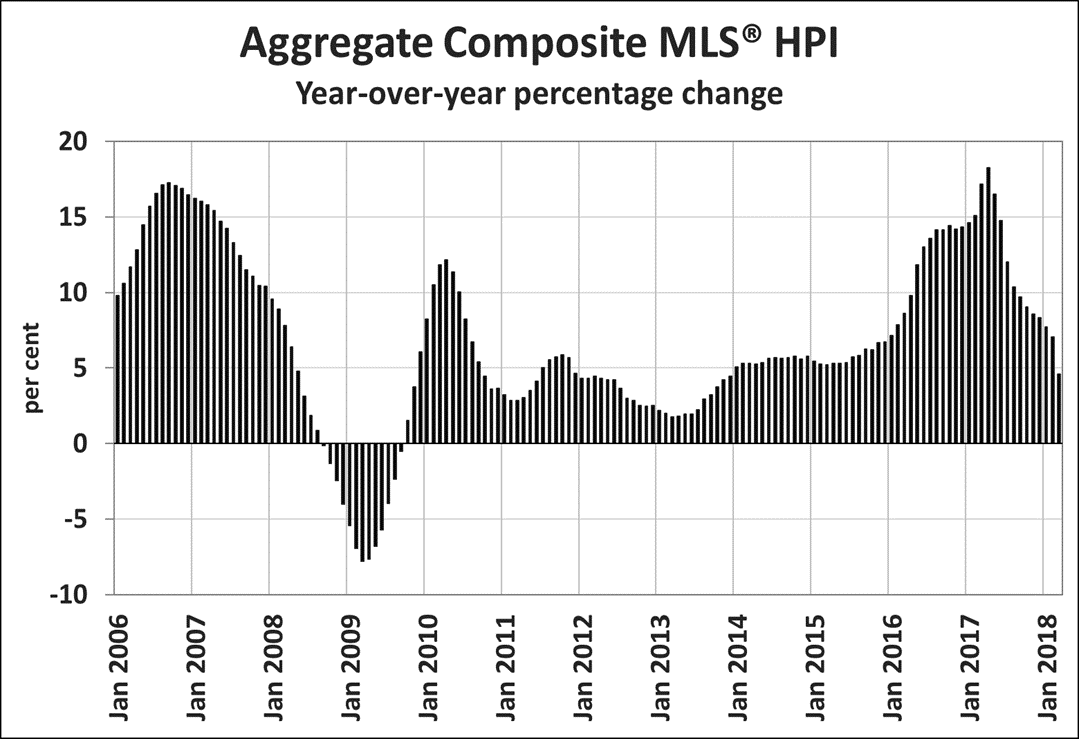 There were 5.3 months of inventory on a national basis at the end of February 2018 – the highest level in two-and-a-half years and in line with the long-term average of 5.2 months.

The Aggregate Composite MLS® HPI rose 4.6% y-o-y in March 2018. This was the 11th consecutive deceleration in y-o-y gains, continuing a trend that began last spring. It was also the smallest y-o-y increase since December 2013.

Slowing y-o-y home price growth largely reflects trends among Greater Golden Horseshoe (GGH) housing markets tracked by the index. Although home prices in the region have stabilized or begun to show tentative signs of moving higher in recent months, y-o-y comparisons may deteriorate further due to rapid price gains one year ago.

As of this release, housing market coverage for the MLS® HPI now includes Edmonton. Benchmark home prices in March were up from year-ago levels in 9 of the 14 markets tracked by the index.

Composite benchmark home prices in the Lower Mainland of British Columbia continue to trend upward after having dipped briefly during the second half of 2016 (Greater Vancouver (GVA): +16.1% y-o-y; Fraser Valley: +24.4% y-o-y). Apartment and townhouse/row units have been driving this regional trend in recent months while single family home prices in the GVA have held steady. In the Fraser Valley, single family home prices have also begun to rise.

Benchmark home prices continued to rise by about 15% on a y-o-y basis in Victoria and by about 20% elsewhere on Vancouver Island.

Within the GGH region, price gains have slowed considerably on a y-o-y basis but remain above year-ago levels in Guelph (+7.5%). Meanwhile home prices in the GTA and Oakville-Milton were down in March compared to one year earlier (GTA: -1.5% y-o-y; Oakville-Milton: -7.1% y-o-y). These declines largely reflect price trends one year ago and mask evidence that home prices in the region have begun trending higher.

The MLS® Home Price Index (MLS® HPI) provides the best way of gauging price trends because average price trends are strongly distorted by changes in the mix of sales activity from one month to the next.