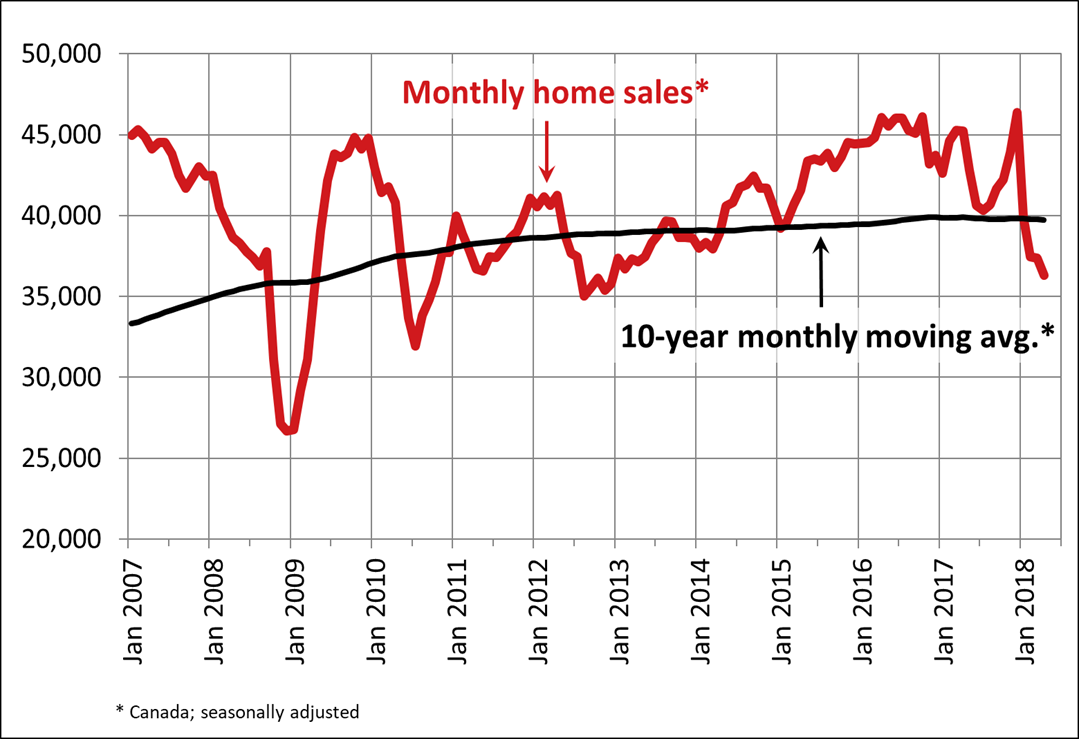 National home sales via Canadian MLS® Systems declined by 2.9% in April 2018 to the lowest level in more than five years (Chart A). About 60% of all local housing markets reported fewer sales, led by the Fraser Valley, Calgary, Ottawa and Montreal.

Actual (not seasonally adjusted) activity was down 13.9% compared to April of last year and hit a seven-year low for the month. It also stood 6.9% below the 10-year average for the month. Activity was below year-ago levels in about 60% of all local markets, led overwhelmingly by the Lower Mainland of British Columbia and by markets in and around Ontario’s Greater Golden Horseshoe (GGH) region.

“The stress-test that came into effect this year for homebuyers with more than a twenty percent down payment continued to cast its shadow over sales activity in April,” said CREA President Barb Sukkau. “Its impact on housing markets varies by region,” she added. “A professional REALTOR® is your best source for information and guidance in negotiations to purchase or sell a home during these changing times,” said Sukkau.

“This year’s new stress test has lowered sales activity and destabilized market balance for housing markets in Alberta, Saskatchewan and Newfoundland and Labrador Provinces,” said Gregory Klump, CREA’s Chief Economist. “This is exactly the type of collateral damage that CREA warned the government about. As provinces whose economic prospects have faced difficulties because they are closely tied to those of natural resources, it is puzzling that the government would describe the effect of its new policy as intended consequences.”

The number of newly listed homes declined 4.8% in April. Having reached a nine-year low for the month, new listings stood 12% below the 10-year monthly moving average.

With sales having fallen by less than new listings, the national sales-to-new listings ratio firmed slightly to 53.7% in April compared to 52.6% in March. The long-term average for the measure is 53.4%.

A national sales-to-new listings ratio of between 40% and 60% is generally consistent with a balanced national housing market, with readings below and above this range indicating buyers’ and sellers’ markets respectively; however, the range consistent with balanced market conditions varies at the local market level.

Based on a comparison of the sales-to-new listings ratio with its long-term average, about 60% of all local markets were in balanced market territory in April 2018.

There were 5.6 months of inventory on a national basis at the end of April 2018, the highest level since September 2015. The long-term average for the measure is 5.2 months. 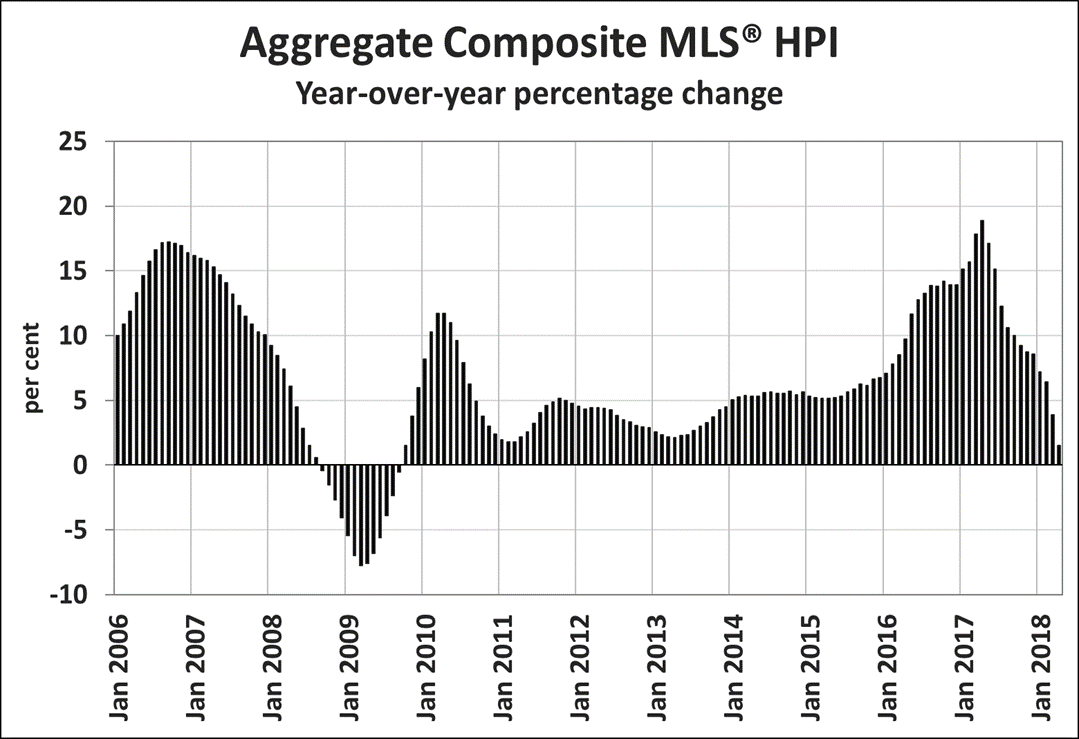 The Aggregate Composite MLS® Home Price Index (MLS® HPI) was up 1.5% y-o-y in April 2018. This marks one full year of decelerating y-o-y gains. It was also the smallest y-o-y increase since October 2009. (Chart B)

Decelerating y-o-y home price gains largely reflect trends among GGH housing markets tracked by the index. Home prices in the region have stabilized and have begun trending higher on a monthly basis; however, rapid price gains recorded one year ago have contributed to deteriorating y-o-y price comparisons.

With this release, housing market coverage for MLS® HPI now includes Barrie and District. Benchmark home prices in April were up from year-ago levels in 9 of the 15 markets tracked by the index.

Composite benchmark home prices in the Lower Mainland of British Columbia continue to trend upward after having dipped briefly in the second half of 2016 (Greater Vancouver (GVA): +14.3% y-o-y; Fraser Valley: +22.7% y-o-y). Apartment and townhouse/row units have been largely driving this regional trend while single family home prices in the GVA have stabilized. In the Fraser Valley, single family home prices have now also begun to rise.

Benchmark home prices continued to rise by about 14% on a y-o-y basis in Victoria and by about 20% elsewhere on Vancouver Island.

Within the GGH region, price gains have slowed considerably on a y-o-y basis but remain above year-ago levels in Guelph (+5.9%). By contrast, home prices in the Greater Toronto Area (GTA), Oakville-Milton and Barrie and District were down from where they stood one year earlier (GTA: -5.2% y-o-y; Oakville-Milton: -8.7% y-o-y; Barrie and District: -8.4% y-o-y). This reflects rapid price gains recorded one year ago and masks recent month-over-month price gains in these markets.

The MLS® HPI provides the best way of gauging price trends because average price trends are strongly distorted by changes in the mix of sales activity from one month to the next.