Ottawa, ON, December 14, 2017 – The Canadian Real Estate Association (CREA) has updated its forecast for home sales activity via the Multiple Listing Service® (MLS®) Systems of Canadian real estate Boards and Associations in 2017 and 2018.

Driven by sales trends in the Greater Golden Horseshoe, Ontario home sales have rebounded from the depths reached in the summer, but remain well below the peak reached earlier this year. Recently announced changes to mortgage regulations next year may be motivating some homebuyers to advance their purchase decision before the new rules come into effect in January.

Meanwhile, sales activity in British Columbia has improved. Supported by rising activity in the Fraser Valley and on Vancouver Island, sales for the province are currently running about midway between the record levels of early 2016 and the lows reached in late 2016.

In the natural resource-intensive provinces of Alberta, Saskatchewan and Newfoundland and Labrador, sales activity is still running at lower levels and supply remains ample. As a result, average prices have flattened in Alberta and eased in Saskatchewan as well as in Newfoundland and Labrador, consistent with their elevated number of months of inventory.

In Manitoba, Eastern Ontario, Quebec, New Brunswick, Nova Scotia and Prince Edward Island, sales activity has been steadily improving. Combined with shrinking supply, housing markets in these regions have firmed up and average prices have been making modest gains.

CREA’s previous forecast published in September identified further changes to mortgage rules as a key downside risk. Indeed, this risk materialized in October when tighter mortgage regulations that take effect next year were announced. Among other things, the new rules make it tougher for would-be homebuyers with more than a 20% down payment to qualify for a mortgage. These low-ratio mortgages comprise the vast majority of Canadian mortgage originations.

Recent research by the Bank of Canada suggests that once they come into effect, tightened mortgage rules will reduce sales activity in housing markets across Canada, particularly in and around Toronto and Vancouver. Additionally, with some homebuyers likely advancing their purchase decision before the new rules come into effect next year, the “pull-forward” of these sales may come at the expense of sales in the first half of 2018. Meanwhile, other potential homebuyers are anticipated to stay on the sidelines as they save up a larger down payment before purchasing and contributing to a modest improvement in sales activity in the second half of 2018. Taking these factors into account has led CREA to narrow its forecast decline in sales activity in 2017 and downwardly revise its sales forecast for 2018.

The anticipated decline in Canadian sales activity in the first half of 2018 due to an erosion of housing affordability from tighter mortgage regulations may mitigated by a number of factors. Some buyers may qualify for a smaller mortgage by purchasing a lower priced home, while others may opt to stretch the amortization period when financing their purchase.

National sales activity is projected to decline by 4% to 513,900 units in 2017. The majority of the annual decline reflects weakened activity in Ontario, where sales fell sharply over the spring and summer in the wake of the province’s Fair Housing Plan that was announced in April. While British Columbia is projected to record almost 9,000 fewer sales in 2017, this decline will be almost fully offset by higher activity in Quebec and Alberta.

The national average price is expected to reach $510,400 this year, up 4.2% from 2016. In recent years, average prices have been heavily skewed by large swings in British Columbia and Ontario sales, particularly for higher-priced single family homes.

The overwhelming majority of the forecast decline in sales next year reflects an expected decline in Ontario sales, with activity anticipated to remain well below the record-levels logged in early 2017. Indeed, new mortgage rules are expected to lower 2018 sales in all provinces except Quebec and Newfoundland and Labrador.

Based on research by Altus Group, the forecast annual decline of more than 27,000 sales from 2017 to 2018 translates into a decrease of $1.1 billion in economic activity and nearly 12,000 fewer jobs.

New mortgage rules and further interest rate increases are expected to further hold sales in check in Greater Vancouver and Greater Toronto. As a result, the average price is forecast to hold steady in British Columbia in 2018, while declining by 2.2% in Ontario.

In an extension of current trends, average prices in 2018 are forecast to rise in Quebec, New Brunswick and Nova Scotia. However, price gains in 2018 will be restrained by in all markets by tougher mortgage qualification criteria for low-ratio mortgages that will weigh on higher-end home sales activity.

Also in line with 2017 trends, average prices in Alberta, Saskatchewan and Newfoundland and Labrador are forecast to either hold steady or edge back slightly in 2018. 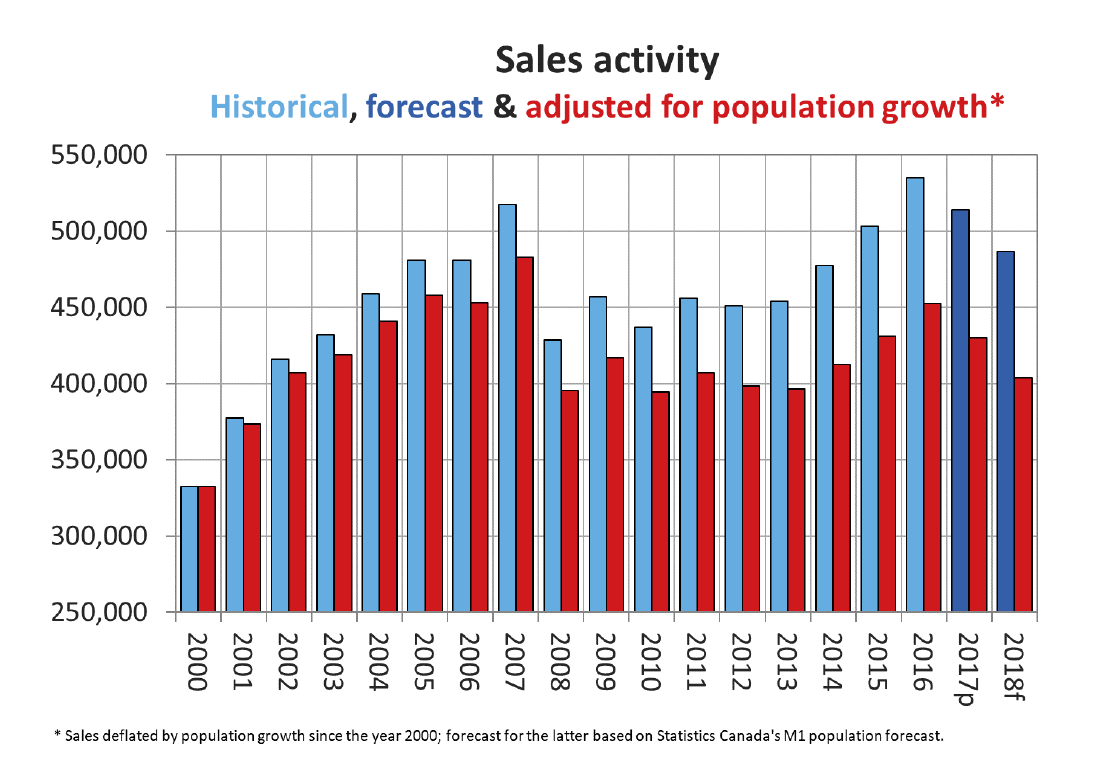 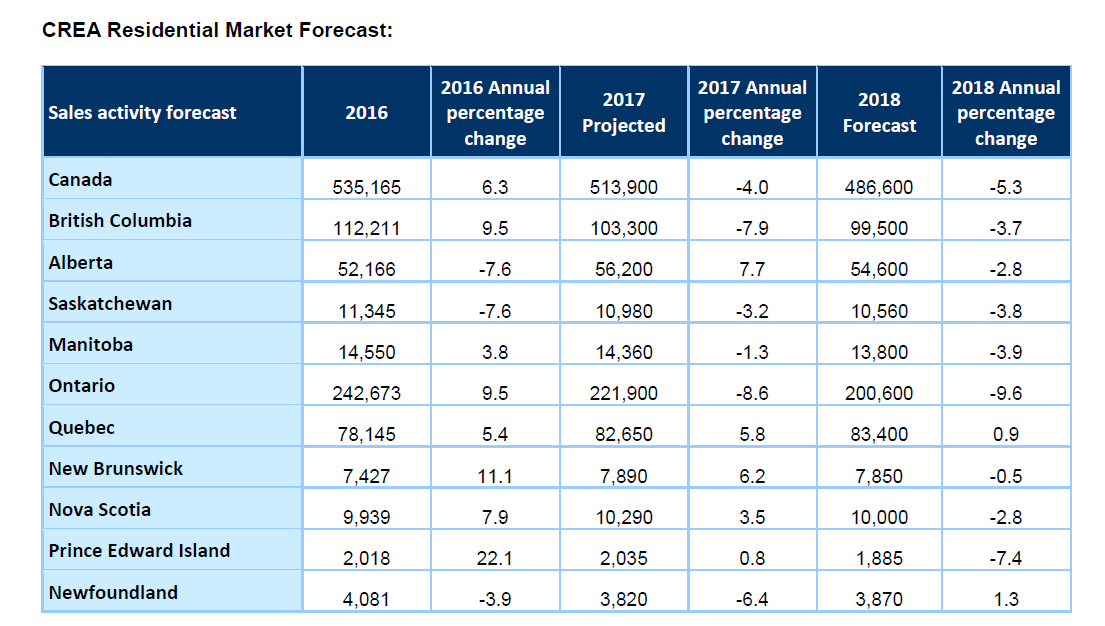 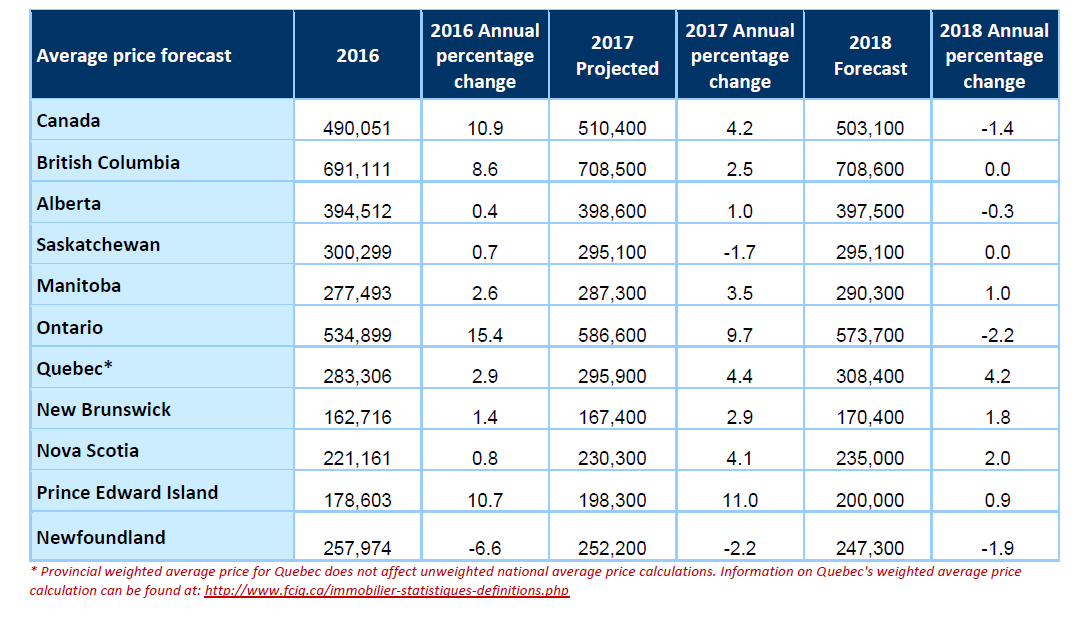